Pre-Order the New Album – Crazy All By Myself

Pre-order “Crazy All by Myself” now!  And get the song – Lil Death – today! 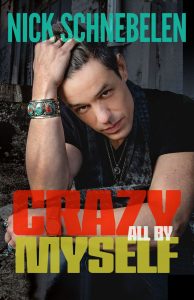 Nick Schnebelen calls in to the Dusty Banks to discuss his his new trio and tour as well as his past work in the internationally renowned band Trampled Under Foot. He’ll even give some details on his upcoming album Crazy All By Myself slated for release in March 2019.

Listen to the entire conversation here! In 2000, Schnebelen and his siblings formed trio Trampled Under Foot (a nod to the Led Zeppelin song). They gathered awards and accolades, reached top 10 charts and, despite disbanding in 2015, still have quite a fan base. Schnebelen is now recording and touring with his own blues band. In February 2019, he plans to release the album “Crazy All By Myself.” His collaborations demonstrate his longevity and talent as a blues-rock musician.

On Friday night, he’ll slide onto the stage to headline the free Levitt AMP concert series at Webb Field in west Ocala. Schnebelen spoke about his music and his influences by phone last week.

Question: What’s your sound and style?
Answer. My style is playing a lot of styles of blues. There’s a lot of modern blues and a lot of throwback blues. I cover a lot of different styles of blues with a lot of my different guitars. I play a lot of electric guitar, but I also play dobro and slide. Basically, it’s different sides to myself.

What else: Non-profit spotlight on Fort King National Historic Landmark. Levitt AMP Ocala Music series is a partnership between the city of the Ocala, Marion Cultural Alliance and the Levitt Foundation. For more information, go to concerts.levittamp.org/ocala.

Q. What was the music scene in your home as a kid and how did that influence you?
A. My parents were musicians. When we were young, my parents would always have rehearsals at our house or there was always music around us at all times.

We got to go out and see a lot of the musicians in Kansas City that were the old blues guys. I picked up a lot of their vibe. That’s how it all started. I started playing music at a young age, and we come from a long line of musicians. I had a chance to grow up around some fabulous musicians, so I like to think that I got a well-rounded education.

Q. Who were some of your favorites that influenced you directly?
A. Albert King, Freddie King and B.B. King are my three tops.

Q. What do you feel when you’re playing live, and how do you think this resonates with the audience?
A. When I’m playing live, I’m giving it my all — pushing really hard with my guitar — and I think people really appreciate the intensity. I love playing for people and touring and just putting on a good show.